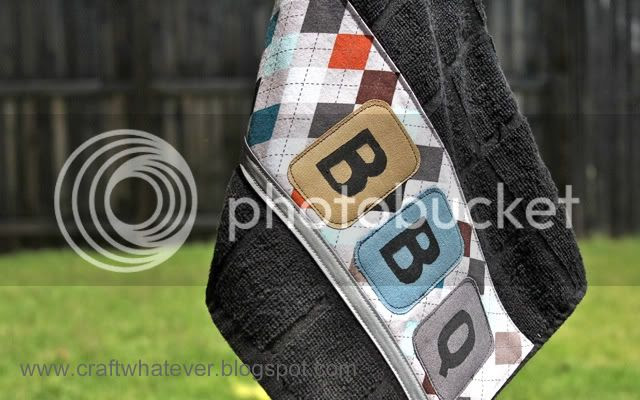 Am I the only one who thinks that men are difficult to craft for?  My husband likes a very simple style and a very limited color palette so this was quite the challenge for me!  Not too bright, not too bold, not girly, not too embellished.  Tailored and masculine.

This is an improved-upon idea from some grill towels I made for my husband last year....Last summer, my husband was deployed and missed our anniversary, Father's Day, and his birthday.  So I just lumped all those occasions into one gift and surprised him with a new grill when he returned!!  I made him grill towels to go with it, but they were pretty weak.  I  just added a grommet to a couple of kitchen towels and called it good.


But this year...I spruced up the Grillin' Towel to be a very styilsh, but manly gift to give.

Here's a sneak peek at the rest!  Come back everyday this week and I will tell you how I made each one! 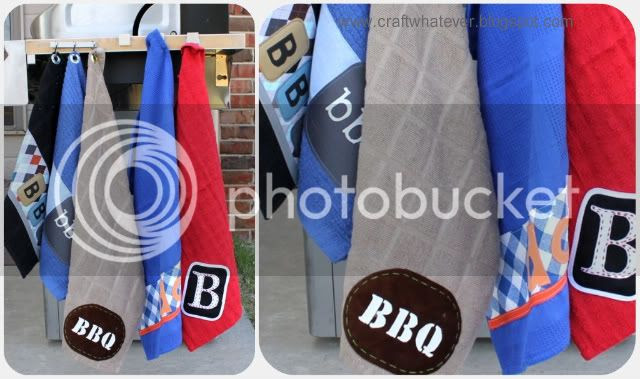 Now, on to the tutorial! 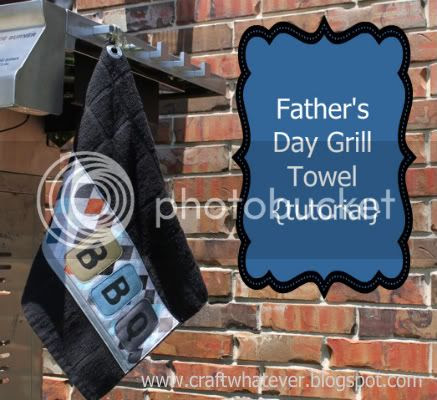 {Tutorial} :  Father's Day Grillin' Towel
Gather your supplies:
****You will also need bobbin thread that is the same color as your towel.  Otherwise you can see all your stitching on the back of the towel***


NOTE:  Before you start, I would strongly suggest prewashing the towel and fabric.  Both can have a tendency to shrink when washed.  I like to get all the shrinking out of the way b-e-f-o-r-e I start the project!


1.  Cut your fabric and bias tape to fit your towel.  The fabric is folded in half widthwise...your band of fabric can be any size.  I made mine ~4 inches wide.  If you follow that, you need to cut it 8" x (towel width + a few inches).  Then fold the fabric in half.  Press.  Sew together along long side.  This will keep it stable.  I actually serged mine (below).

2.  Sew the bias tape to the fabric band as shown below. 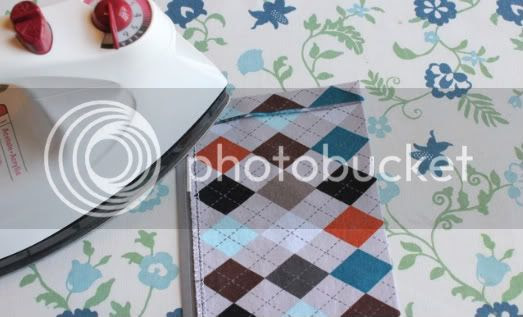 4.  Pin the folded end to the towel.  Start on the right side.  I have found this is the easiest side to start with because of how I am moving the project through my sewing machine. 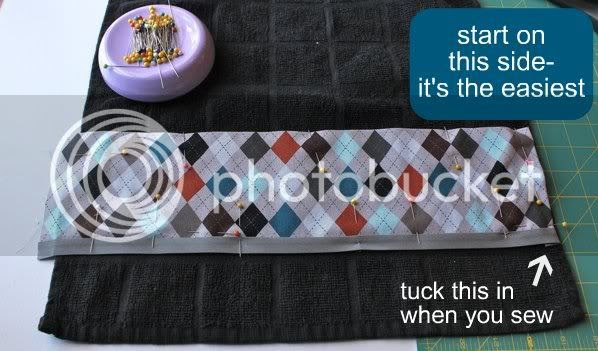 5.  Here is how you will sew the band down.  {Now, I suppose you don't have to do it this way, BUT from my experience (with other towel projects!) this will ensure that your band is sewn straight and even.}


Next, lay out your towel and iron the left raw edge under so that the fabric band will be even with the left edge of the towel.  If it is too long, which mine was, cut it down.  You just need about 1/2" to fold under.  Pin in place.  Now sew again... 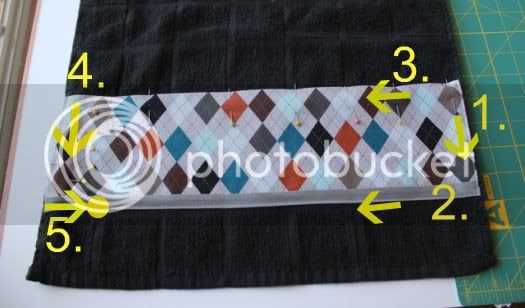 This is where you will be at the yellow dot. 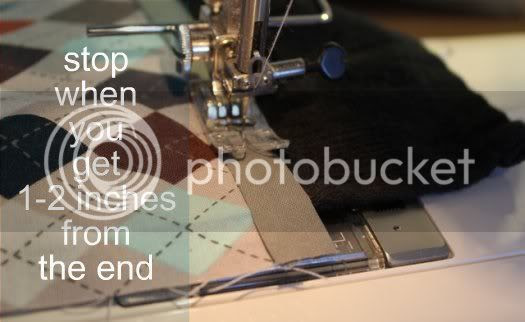 6.  Now sew down other edge of the bias tape.

7.  Attach the iron-on patches.  Decide where you want to place your iron-on patches.  Follow the directions on the package to iron them on.  But realize, once you heat them up, they are stuck!  So choose wisely and if you want them even, line them up the best you can.  **Also, if you are doing a freezer paper stencil, then you have to iron the patches on first.  I suppose if you have a vynil stencil (silhouette or cricut) then you could stencil at the very beginning to shorten your drying/waiting time.

Here is me trying to get them straight and even.  I had just ONE shot to get it right!

8.  And since freezer paper stenciling is pretty common, I will just give you some links here to a tutorials:  at Panjo Kids , at Made, at How About Orange, and at Simply Modern Mom.  All are very easy to follow tutorials.  Take your pick.

Here is my play by play with the freezer paper stenciling. 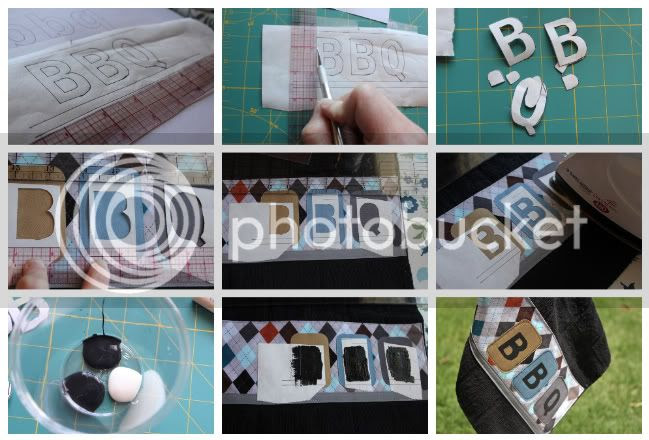 For my paint, I just used a regular acrylic craft (black) mixed with a fabric medium (white).  Just 'cause that's what I already had on hand.

9.  Now you have to let this DRY.  I waited overnight.  {I know, right!?}  When the paint is completely dry, edgestitch around each patch- just to be sure! 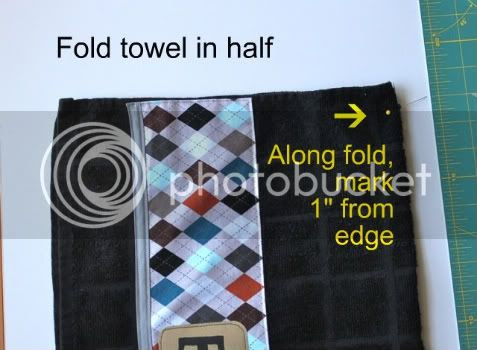 Install the grommet according to the package directions.  You can buy a grommet kit (which includes everything you need) at a fabric store or a home improvement store.  If you have never used a grommet I can offer two tips:  1--do this on concrete (garage, patio, etc.) and 2--"pound" don't tap! 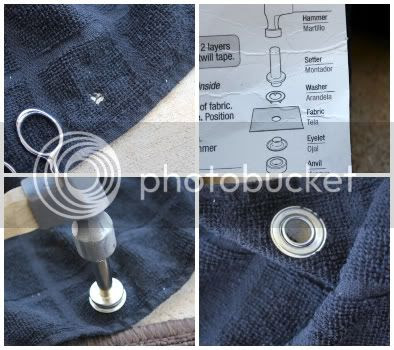 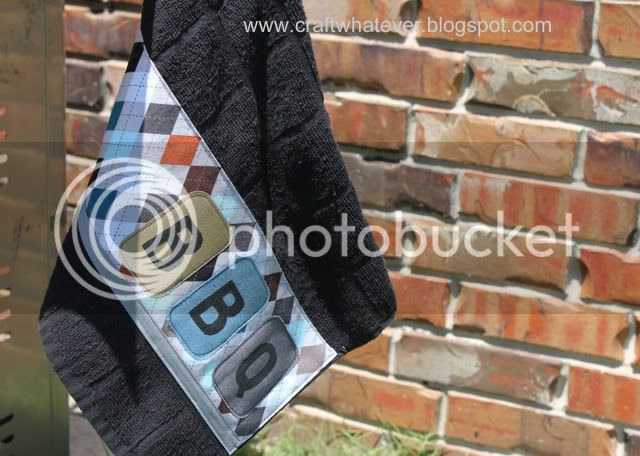 Funny thing is, our grill didn't have any hooks or bars on it.  I actually added these.  They are just drawer pulls from the home improvement store.  I bought shorter screws because the screws that came with the knobs were too long (since I am just attaching them through a thin sheet of metal).  I used my drill to make holes.  And attached the drawer pulls.  The L shaped ones are installed upside down.  Our grill tools have leather strings on them and just loop right on the hooks.


Lastly, I bought these S hooks but a caribbeaner clip would also work. 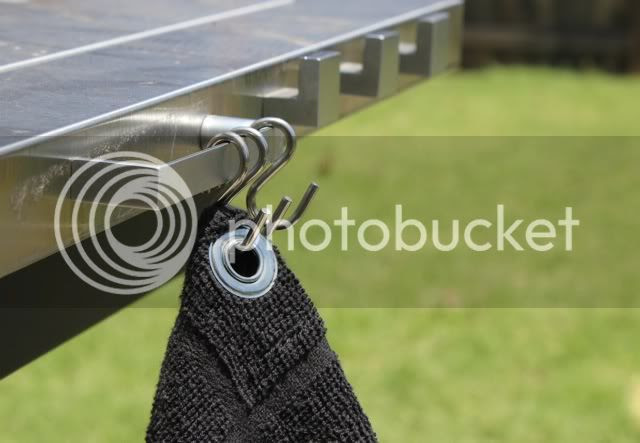 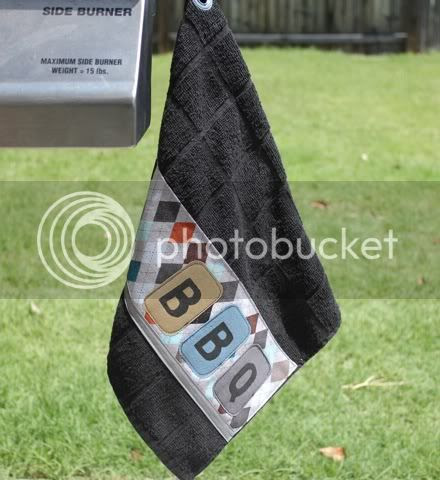 ~~~Now, come back tomorrow, and every day this week and I will show you 4 MORE towels that I made...all different...all manly...all easy!~~~


**UPDATE:  Check out four more GRILLING TOWELS that I made.  They are variations of this one so, same concept, just another look!  Blue on Blue Grill Towel.   Red Monogram Towel.  Leather Patch Towel.  Blue and Orange "dad" Towel.